“The light of hope can illuminate the darkness of our lives if we endeavor to look differently.” 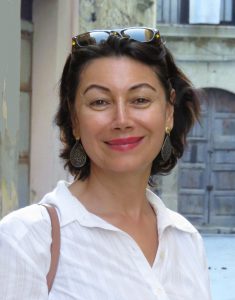 Ms. Yassamin Maleknasr is the first Iranian woman filmmaker to graduate from the University of Southern California in Film and Television.  In 1993, she won the Best Supporting Actress Award at Tehran’s Fajr Film Festival for her debut role in Dariush Mehrjui’s film, “Sara”.  Her first feature film The Common Plight has turned into a cult movie amongst Iranians youth.  Although an award-winning actress, she found purpose behind the camera as a director of documentary films.  She has worked on a wide variety of subjects in Middle East and Central Asia including the children of lepers, the impact of Rumi and earthquake of the ancient city of Bam. Her acclaimed film, “Afghanistan, the Lost Truth”, is the result of a 3,000 miles journey by land post 9/11 and a rare insight to the lives of Afghan women, Afghanistan, and the optimism that endures despite the countless tragedies the country has suffered. Her latest documentary, “Women of the Silk Road” depicts the lives of four women from four countries of the Silk Road, Iran, Oman, Turkey, and Tajikistan through textile. It is the story of diversity and hope. One of struggle, love and courage reminding us of our similarities.

Ms. Maleknasr, an Iranian-American, a bi-cultural artist fluent in English, Farsi, and Dari, can easily gain access and communicate with all people across cultural and religious divides. She has been a speaker at various foundations and women NGOs to talk about women issues and diversity.

Her films have been screened at various networks such as Arte, France and Ireland, BBC, Australian and New Zealand networks, TVC Spain, USHUAIA France, plus special screenings at the Screen Actors Guild – Los Angeles, United Nations – New York, World Bank – Washington DC, the United States Senate, and many universities across the United States.

It is her wish that her films contribute to better understanding between the East and West.